The history of our school, and some images of then and now. 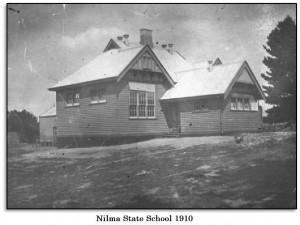 The new building was officially opened on 4th May, 1910 by the Honorable J. E. Mackey, the local Minister for the Electorate. Mr. Mackey also played an influential part alongside the community to obtain the new building. At this time the school name was changed to Nilma, coinciding with the re-naming of the Post Office and Railway Station. The name Nilma was chosen as it was the Aboriginal name for ‘the home of the Gang Gang Cockatoo’.
The name was changed in March 1910, due to the confusion within the postal service. There was also a town named ‘Broomfield’, which was near Creswick, which was very similar to ‘Bloomfield’.
Once the new building had opened, the Library had 150 books, pictures and drawings, which were donated by community members
Mr. Williams donated £20 himself and also Cr. Count Von Horn donated £2 so as to encourage regular attendance.
Mr. Williams, who was the Head Teacher at the time, was quite artistic, the school building was well known for the decorations that he had put on the walls. Mr Williams also built a miniature rifle range at the school for student use.
The old original building was used as a sewing/ science room, donations towards this were from the local residents.
A rifle rack was built into the new building to house 22 rifles as many students from the school had become part of a Cadet Movement that was popular in primary schools in that era.
The original building was in use until it was sold and taken away by Mr. J. Fraser in 1921. It was relocated to Nilma North.

A new flag pole was erected in 1911 along with a ‘Bell and Stand’, was supplied to the School which ‘besides being an ornament to the grounds, serves to awaken the solitudes of Nilma’.

The bell still stands in the school grounds today, and rings out to attract attention of the children. 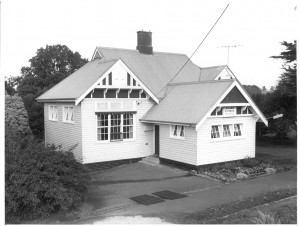